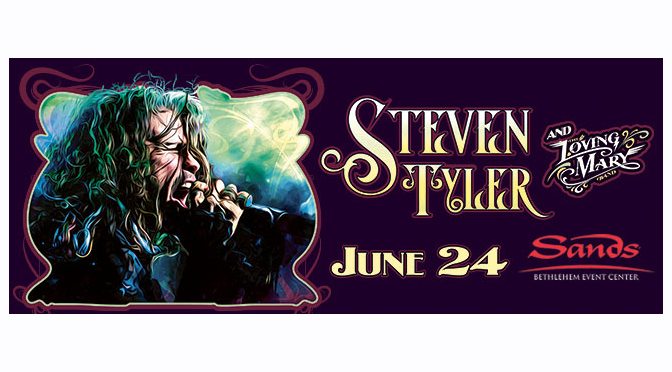 If you felt the earth shake, the rock gods were smiling because it was Steven Tyler rocking the Sands Bethlehem Event Center. The Sands was packed with people that wanted to see Steven Tyler and The Loving Mary Band. The crowd was revved and ready to go. The Sisterhood Band which was the opening act took the stage to get everyone ready for Steven Tyler. The Sisterhood Band is made up of the amazing Ruby Stewart (Yes, Rod Stewart’s daughter) and Alyssa Bonagura. They performed a few songs. They had lots of energy, and they kept things light and fun.

The crowd was ready for Steven Tyler and The Loving Mary Band. If you have never seen Steven Tyler perform live, you MUST. He came out and is absolutely captivating and one of a kind. There is no one like Steven Tyler. He started off with “Sweet Emotion.” He wrote the song, and no one sings it better than him. Steven Tyler is seventy years young. You would not know he is seventy and his voice is just as powerful.

The Loving Mary Band was incredible. They all complement each other. The band is Marti Frederiksen, Rebecca Lynn Howard, Suzie Mcneil, Elisha Hoffman, Andrew Mactaggart and Sarah Tomek. They truly rocked and did such an incredible job keeping up with Steven Tyler. They are energetic and alive.

Steven Tyler also included the audience in wishing the co-founder of Fleetwood Mac, Mr. Mick Fleetwood a Happy Birthday on Facebook Live. Two legends and both acknowledging the talent of one another. Imagine Steven Tyler singing Happy Birthday to YOU! The audience was ready. Steven talked about each song before singing, and he had family in the audience. He sang everything from “Cryin’” to “Come Together” by the Beatles and he SANG the songs.

Steven Tyler puts his heart, soul and every “Sweet Emotion” into his songs. You can feel every single word this beautiful artist sings.

He is one of the most gifted vocalists ever and to hear him sing is amazing. He also sang “Jaded,” another Aerosmith song. They performed “What It Takes.” This is a well-known Aerosmith song, but the audience sang along with almost every song and knew every word. Steven Tyler inter-acted with all of us and told brief stories as he went through the songs. Beautiful, lively and fun stories. He is like a tornado mixed with a tsunami of bright energy.  He thanked the audience and then he just rocked, the song “Piece of My Heart” (Erma Franklin and Janis Joplin sang it and it was written by Jerry Ragovoy and Bert Berns) and Steven did the song justice.

Steven Tyler has a new solo album titled, “We’re All Somebody From Somewhere” which is also the single. It is such a good bluesy/rock song. You cannot help but sing and dance along. The audience had no problem at all singing. There were seats but not one person was sitting. The audience caught all of Steven Tyler’s contagious energy. He was all over the stage and came down into the audience to say hello to his Aunt and Uncle. He also greeted a few audience members.

This concert was incredible. The Sands staff, as usual, was kind and helpful. It is difficult to say which song people were the most excited to hear. Steven Tyler sat at his beautiful piano and “Dream On” started. This is one of the most brilliant songs ever written. The song is instantly recognizable as once again the crowd sang along and people just looked happy. There was a euphoria in the air tonight.

There was energy just radiating off of Steven Tyler. He also performed “My Own Worst Enemy” and “Train Kept A-Rollin” (A Tiny Bradshaw cover) and then they thanked the audience, but Steven Tyler and The Loving Mary Band were not finished. The crowd erupted and of course an epic encore. Steven Tyler was back on-stage and this time he was on the drums! Steven Tyler was rocking the drums. He did the coolest drum solo. He is a man of many talents.

Get tickets and go see all the amazing events at the SANDS!