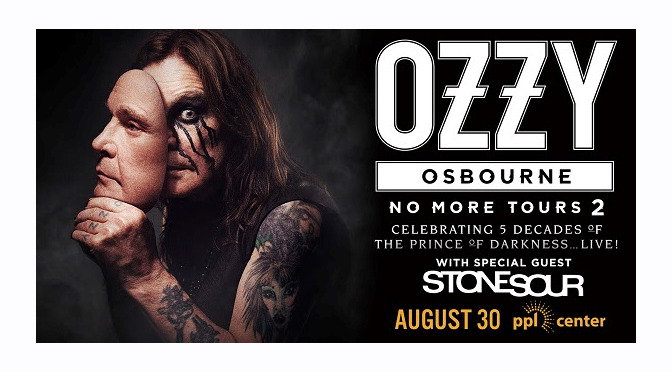 Our very own Janel Spiegel was among the many fans that packed into the PPL Center to see Ozzy Osbourne with special guests Stone Sour on August 30th.

Never in my life for some crazy reason had I ever imagined I would even get to see the legendary Prince of Darkness himself. OZZY OSBOURNE. Ozzy Osbourne has been around for five decades. He is a Rock and Roll Hall of Fame inductee and Grammy-winning singer and songwriter. Ozzy embarked on Allentown, PA along with special guest Stone Sour who opened the show. The killed it. They had a cool set-up, and they killed every song. The fan favorite was “Bother.” The band: Corey Taylor –Vocals, Josh Rand – Guitar, Christian Martucci- Guitar, Johny Chow- Bass and Roy Mayorga –Drums all rocked. They have so much passion and power in the songs they did.

The lead singer thanked Ozzy and the fans. He said he would “not be here if it wasn’t for Ozzy.” There was a brief intermission in order for them to change the stage. Ozzy’s name appeared on the screens and some of the crowd had taken off for drinks, food etc. The PPL Center is so nice. Everyone is so helpful. They help you if you have any questions at all.

But, as you heard the introduction, you heard Ozzy’s voice and the crowd erupted. I have been to a lot of shows and this one was LOUD, EXTRA LOUD! These people were ecstatic. The applause, the happiness, people singing along and the merchandise sold-out quickly. I think every person there had an Ozzy shirt on. This shows the impact and people came from all over. I talked with a few people and some people drove for days and hours to see Ozzy.

Ozzy also brought the GREATEST band imaginable! Zakk Wylde- Guitar and LEGEND, Blasko –Bass, Tommy Clufetos on drums and Adam Wakeman on keyboards. Ozzy introduced the band and as he introduced Zakk a “Zakk Chant” started from the crowd. He is INCREDIBLE!!! One of the greatest, if not the greatest guitar player ever.

Ozzy started off with “Bark at the Moon” and then moved on to “Mr. Crowley,” and his backgrounds on the screens were awesome. He did “I Don’t Know,” “Fairies Wear Boots,” “Suicide Solution,” “No More Tears” in which every single person in the PPL Center was singing along with Ozzy.

Ozzy came back to rock some more and he did, “I Don’t Want to Change the World,” “Shot in the Dark” and one of the most epic songs in all of history. You know it just by the introduction, “Crazy Train.” The rocked so much and Ozzy got ahold of a fire hose on-stage. He had fun spraying the audience and they loved every second of it. Of course, teasing the audience. He left and came back then they did an encore.

Ozzy did, “Mama, I’m Coming Home” and “Paranoid.” He rocked. This show was outstanding. If you get the chance see Ozzy YOU NEED to see him in concert. Also Zakk Wylde. At the very end they played, “Changes,” (Ozzy and Kelly Osbourne.) they played it while the crowd made a mad rush to get out. Some people stayed put. They looked in hope as if Ozzy might come back out one more time but he didn’t. The show was amazing. The PPL Center and the Allentown Police had everything covered and making sure the traffic was moving.

This is a highly recommended show. You must see it. The amount of energy Ozzy has for being sixty-nine years old. The man is unreal. This was one of the greatest concerts ever. It is always so cool to see people and how much fun they have. Never stop rocking. Like, Ozzy said, it keeps him young.