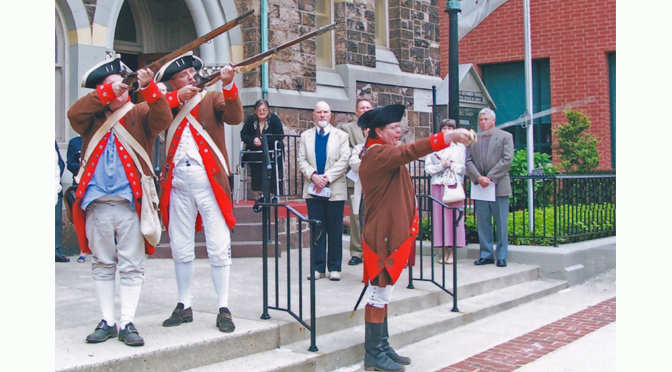 The congregation at Zion’s United Church of Christ, 620 W. Hamilton Street, Allentown, has even more to celebrate than usual this year at their annual Patriot’s Sunday service. Held each year on Memorial Day weekend to commemorate our local militia’s endorsement of the Declaration of Independence from Great Britain in 1776, this year’s emphasis will be on the “little liberty bell” that called the Patriots to action.

Cast in 1769 and hung above the church doors, the “little liberty bell” has its own story, told in a 250th anniversary exhibit at the Liberty Bell Museum, located in the lower level of the church building.

The 10:45 a.m. worship service includes “living historians” from the 6TH PA Regiment, men and women wearing authentic garb from the Colonial period who tell the story of that era. Following the service the Regiment will load and fire their muskets to salute the Patriots being remembered Memorial Day weekend.

Guests from the Valley Forge Chapter of the Pennsylvania Society of the Sons of the American Revolution will also be in attendance.

The public is invited. The museum exhibit is open following the service of worship.

“The Little Bell That Rang for Freedom” exhibit showcases the bell that became known as Allentown’s Liberty Bell as it celebrates its 250th anniversary.

Cast by Matthias Tommerop in 1769, the bell hung above the entrance to the church and was rung to call members to worship on Sunday mornings. They also rang it to assemble everyone from the community whenever there was important news to share, notably for the public reading of the Declaration of Independence in Allentown sometime in July, 1776.

Then in 1820, after the church invested in a larger bell, the Allentown Liberty Bell was moved to ring at the Allentown Academy, one of the early schools to receive funding from the Pennsylvania State Legislature. The bell was returned to the church in 1926, where it again hung until 1999 when it was “rediscovered” and restored.