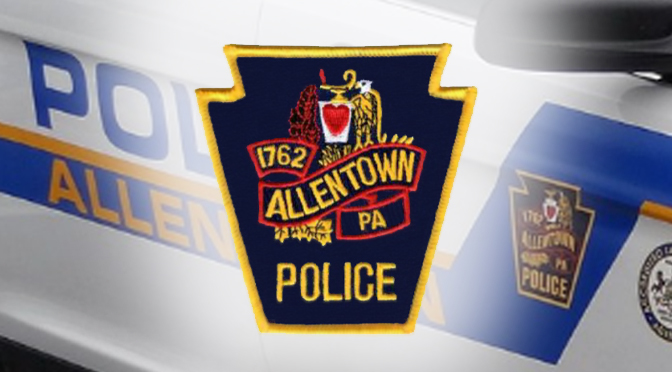 The Allentown Police Department honored 50 officers at a commendation and awards presentation ceremony and memorial service this morning at the Scottish Rite Cathedral.  Officers were recognized for bravery, heroism, having an instrumental role in saving a life, merit and achievement.

The event was held to mark National Police Week.  The department also honored other residents and businesses for their contributions or donations and elementary school student safety officers.

O’Connell told the audience, “The tales of bravery and heroism we will hear today illustrate the dramatic and aggressive efforts taken by our police and citizens to maintain a safe community.  We are mindful that, together, we must build Allentown’s reputation as a safe place to live, work, visit and invest.”

Captain John Hill and Officers Andrew Holveck, Michael Hammer and Kyle French were honored for bravery for evacuating a July 2018 domestic shooting victim even though they believed that the armed suspect was still inside the residence.  The suspect was later apprehended in another location.

Sergeants Andrew Moll and Timothy Snyder and officers Eric Sbat, Talden Cashatt, Bejtullah Mehmeti and Zachary Ball received a commendation for bravery after taking an armed man into custody at police headquarters this past January.

Officer Sbat engaged the strangely behaving man in conversation at the front window. The man kept his hood up, shielding his face from view of the officer and had his left hand in the sweatshirt pocket. Officer Sbat could clearly tell that he was holding something. The man remarked how he wanted to “talk” and waved for Officer Sbat to come out to the lobby. Officer Sbat continued to press him about what he needed, and the man kept trying to get Officer Sbat to come outside. The man then looked around the lobby and drew a stolen silver handgun from his sweatshirt pocket and pointed it at Officer Sbat’s face.  The officers took cover and drew their service weapons and ordered the man to drop the gun.  The man eventually put down the loaded weapon and was taken into custody unharmed.

Officers Michael Torres, William Skriletz and Adam Sinton received commendations for heroism for preventing a man from falling from the bridge over the Jordan Creek in the 300 block of Tilghman Street in May 2018.  Officers arrived to find a man with both legs over the wall.  Officers eventually lunged and grabbed the man as he made the sign of the cross and prepared to jump.

Detective Andrew Hackman and officers French and Zachary Bubnis are recognized for heroism for their actions after a deadly bombing at Hall and Turner streets last September.

Detective Hackman and officer Bubnis were first on the scene.  They began to assess the situation, attempted to get civilians to a safe location and started to secure the crime scene, all while there were secondary explosions and the vehicle containing the bomb was still burning.

The third and fourth platoons received unit citations for the same incident.

Dispatchers at the Allentown Communications Center fielded hundreds of calls and directed responding emergency service units to the scene of the explosion. Their ability to remain calm under intense pressure assisted in preventing further loss of life and helped in coordinating the police, fire, EMS, and other units that responded.  As a result, Civilian Awards are presented to Dispatcher Supervisor Melissa Alvarez, Operations Manager Steven Ridgway and dispatchers Justin Zucal, Ana Mendez, Kyle Mertl, Shawn Kane, David Gatens and Matthew Haedrich.

Keystone Awards were presented to Lehigh County Deputy Sheriff Rich Garner, Upper Macungie police officer Ryan Rhoads, Macungie Ambulance Corps Operations Manager Christopher Greb, and Scott Lindenmuth and John Kalynych of Lehigh County Emergency Services for their efforts at the scene of the explosion.  The Keystone Award may be presented to individuals or organizations outside of the department for exceptional heroic acts or extraordinary community contributions.

Officers French, Joseph Krebs and Jason Aduddell were cited for heroism after successfully taking a knife-wielding man into custody who told officers last January they would have to kill him.  When an opportunity presented itself, Krebs hit the man with his Taser and French and Aduddell disarmed and apprehended the suspect.

Over the past year, the department established a new commendation category of life saving.  It is awarded when employees actions result in the saving or preservation of a human life that otherwise would have expired without the employee’s direct involvement.

Commendations for Achievement were awarded to Sergeant Christie Correa and officers Mark Jarrouj and Stephen Madson.

Keystone Certificates were presented to the U.S. Marshal Service, Homeland Security Investigations and Policia Federal Seguridad Nacional.  This certificate is issued to recognize contributions and above average assistance rendered to the Allentown Police Department.

Civilians David Roth and Kayla Espinal were honored for witness descriptions leading to the arrest and conviction of a November 2017 homicide suspect.

Civilian Eliud Matica was recognized for his role in the identification and apprehension of a June 2018 strong-armed robbery suspect, who later confessed to other robberies in the city.

Civilian Nicole Barela was honored by the department for assisting an injured bicyclist.  Barela rendered aid to the victim, summoned emergency services and stayed with the victim until police and paramedics arrived.

William Allen High School Security was honored for assistance and cooperation with the Allentown Police Department with more than a thousand calls for service since 2011.  The security team has assisted and backed-up APD officers responding to fights, assaults, drug complaints, weapon complaints and various other types of calls.

Allentown EMS Paramedics William Sames and Andre Harris were feted for coming to the aid of an officer involved in a violent struggle with a suspect at 8th & Chestnut streets in October 2018.  The paramedics held one of the suspect’s arms so that the officer could secure the suspect in handcuffs.

The department also announced at the ceremony that it will name commendations for valor in honor of Patrolman John A. Rau, who was struck by a vehicle and killed in an on-duty accident in 1931.