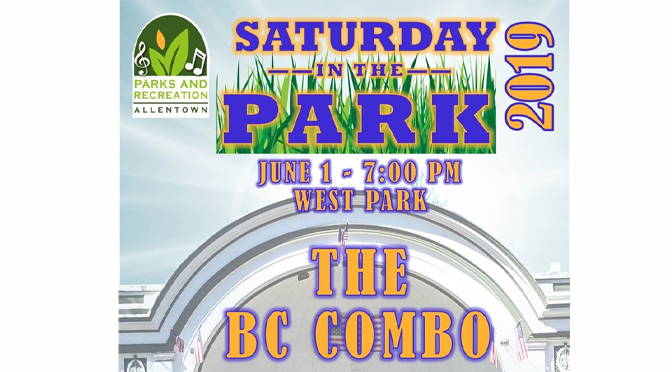 The Allentown Department of Parks & Recreation’s 2019 “Saturday in the Park” concert series opens this Saturday, June 1 at 7:00PM with the BC Combo at West Park.

Five concerts are planned as part of the “Saturday in the Park” series and all are held West Park, between now and September 10.

According to their website, “The BC Combo is a highly respected group of singer-songwriters who bring their wealth of experience and passion to Blues, Jazz, Swing, Folk, R&B, Soul and more. The list of who’s who continues from their stage performances with Ray Charles, Koko Taylor, Shemekia Copeland, Son Seals, Lonnie Brooks, Rhonnie Baker Brooks, Saffire, the Holmes Brothers, Carl Weathersby, Eddie King and so many more.”

Conklin is joined by Wayne Smith on guitar, percussion and vocals.  He was the Lehigh Valley Music Awards 2019 recipient of the Lifetime Achievement Award and previously for Best Guitarist and Best Keyboardist among others.

Kevin Groller is the BC Combo’s drummer; Pozz is on keyboards, bass, guitar and vocals, and guitarist Joe Mac became an official member of the band last year.

The City of Allentown’s Saturday in the Park series features a wide variety of concerts during the summer of 2019. The series also features Hector Rosado and Orchestra Hache, Lucky 7, The Large Flowerheads, and James Supra & Sarah Ayers Quartet.

The Udder Bar is featured as the food vendor for this concert. They will be selling ice cream.

West Park is located between 15th – 16th Street between Linden and Turner streets. Plenty of seating is available.

For more information, please contact the City of Allentown Department of Parks & Recreation at (610)437-7750 or visit us at www.facebook.com/AllentownParkandRec.