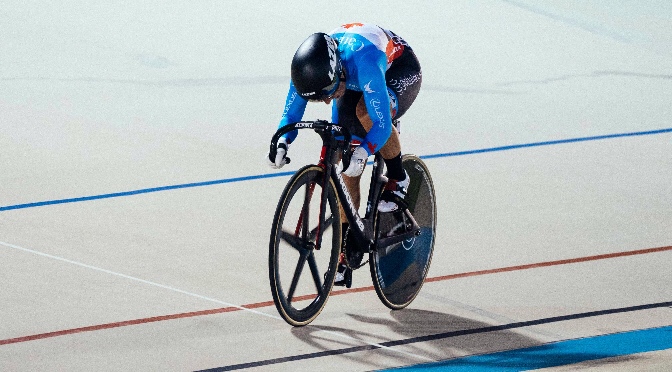 Trexlertown, PA.  Day two of the UCI Festival of Speed saw both Sprint and Endurance action unfold on the track as one of the biggest and most international fields in track history assembled on the iconic T-Town velodrome.

Long-standing records fell as local stand-out Team Novo Nordisk rider Mandy Marquardt (USA) beat the 1991 record for the 1K standing kilo with a new best time of 1:11:168 replacing the old mark of 1:12.  Homare Yamashita (USA), age 13, set a new National Record in the 2K for Junior Women – beating a record older than her (16 years) which was set here in 2003 by another graduate of Air Products Community Programming, Lauren Shirock (USA).  Jean-Luc Contant-Galitello (USA), riding for the USA Cycling Olympic Development Program set a new record in the Junior Men’s Flying Lap, shattering the old record or 19.22 set in 1989 by riding a time of 18.679.

In the Women’s Omnium Canadian Allison Beveridge (CAN) won with 112 points over Norwegian National Team rider Anita Stenberg (NOR) who amassed 100 points narrowly beating Austrian Verena Eberhardt (AUT) who finished in third with 99 points.   In the Men’s Omnium the margin of victory was tighter with Colombian Juan Esteban Arango (COL) winning with a total of 126 points over Canadian Derek Gee (CAN) at 121 points and Regan Gough (NZL) of New Zealand with 119 points. Hometown star Shane Kline (USA) missed the podium coming in 4th with 100 points.