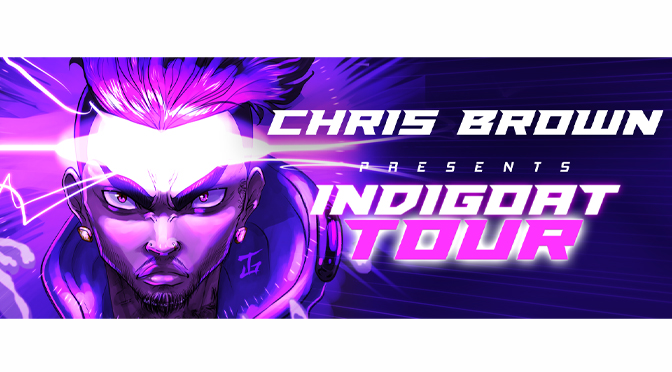 Allentown, PA (June 10, 2019) – Global music icon, world-class entertainer and Grammy Award winner Chris Brown will be hitting the road for the epic INDIGOAT Tour, set to play PPL Center on Wednesday, September 18 at 6:30 p.m. Brown will be joined by some of the hottest names in hip-hop including Tory Lanez, Ty Dolla $ign, Joyner Lucas, and Yella Beezy. Following last year’s highly successful Heartbreak on a Full Moon Tour, Brown is returning to the stage, where he’ll wow audiences across the U.S. with a fresh high-energy show complete with his signature dance skills and strong vocals, as well as new music.

Tickets go on sale to the general public beginning Friday, June 14 at 12:00 p.m. at the QNB Box Office, PPLCenter.com, or by phone at 610-347-TIXX [8499]. Citi is the official presale credit card of the INDIGOAT Tour. As such, Citi cardmembers will have access to purchase presale tickets beginning Wednesday, June 12 at 12:00 p.m. until Thursday, June 13 at 10:00 p.m. through Citi EntertainmentSM. For complete presale details visit www.citientertainment.com. With every two tickets purchased, fans will also have the option to buy INDIGO.

Ahead of the tour, fans can look forward to Brown’s highly anticipated 9th studio album, INDIGO, out June 28 via RCA Records, with star-studded features from Justin Bieber, Nicki Minaj, G-Eazy, Juicy J, Trey Songz, Tory Lanez, Tyga, H.E.R., Lil Jon, Joyner Lucas, Gunna and Tank. Coming off the heels of catchy tracks, such as “Wobble Up,” “Back to Love,” and “Undecided,” Brown has teamed up with global superstar Drake for the album’s new smash, “No Guidance” produced by Vinylz, J-Louis and Noah “40” Shebib. The single is available now on all platforms here. The 33-track INDIGO album is available for pre-order now here, and Apple Music subscribers who pre-order the album will receive “No Guidance” as an instant download.

Fans attending the tour can expect a remarkable set list with a mix of Brown’s classic hits and new tracks from his new album. Kicking off August 20 in Portland, OR, the extensive 38-city tour produced by Live Nation will make stops at major arenas in New York, Chicago, Houston, Los Angeles, and more, before wrapping in Anaheim, CA on October 19.

Chris Brown, a consummate entertainer who has shifted the climate of R&B culture since his eponymous 2005 debut, has sold in excess of 30 million albums worldwide and has surpassed over 10 billion audio streams across digital outlets to date. Brown has won more than 125 awards including a Grammy Award for his album F.A.M.E. in 2011 and has amassed over 7.5 billion YouTube views – including over 40 music videos that each have more than 100 million views earning him the title of male artist with the most Vevo certified videos ever and ‘Diamond’ status from the streaming platform.

A chart topping force, Brown has made more Billboard Hot 100 entries since the start of his career than any contemporary male singer alive to date, spending 160 consecutive weeks charting on the Hot 100. His last album Heartbreak On A Full Moon has been streamed over 1 billion times on Spotify and has been certified 2X platinum. The album spent more than a year on the Billboard Hot 200.

An accomplished entrepreneur and business owner, Brown’s tenacity behind his venture into fashion with his Black Pyramid brand has transformed his business from a digital fashion giant to acquiring a worldwide distribution deal and being carried in major retailers globally. In addition, Brown’s commitment to philanthropy is as important to him as his professional pursuits – including his dedication to the Symphonic Love Foundation, a charitable organization that he founded which supports and creates arts programs for youth. Brown has also donated his time and resources to various non-for-profit organizations including St. Jude Children’s Hospital, Best Buddies, Hurricane Harvey victims, and Colin Kaepernick’s recent “10 for 10” million dollar pledge.

PPL Center (pplcenter.com) is a state-of-the-art multipurpose venue in downtown Allentown, PA. The arena seats more than 10,000 for concerts and more than 8,500 for Lehigh Valley Phantoms professional hockey games, making it the region’s largest events venue. The amenities-packed PPL Center hosts more than 150 events each year, offering something for everyone, including the Phantoms, the AHL affiliate of the NHL Philadelphia Flyers, live concerts, family shows, trade shows, figure skating events, youth sports, high school and collegiate events, Disney on Ice, conferences, graduations and many more events. PPL Center is currently the main catalyst to the revitalization and growth of downtown Allentown. Spectra provides the Venue Management, Food Services and Hospitality, and Partnerships divisions at PPL Center.