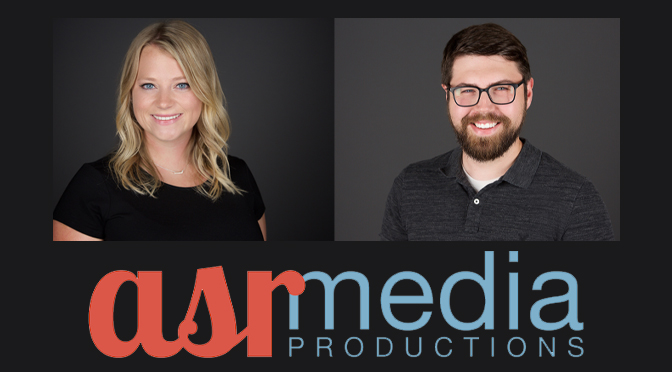 Award-winning video production company is expanding to better serve clients in the Lehigh Valley and beyond.

“As the number of companies and organizations understand the value and varied use of video, ASR Media is fortunate to grow and build our exceptional team,” states Ashley Russo, President and Executive Producer of ASR Media Productions. “The addition of Steve and Krysta in the new roles will allow us to better serve our clients and continue to build on our capabilities.”

Gunderman, a graduate of Bloomsburg University, joins ASR Media from Victaulic Manufacturing where she was a Customer Care Account Representative. It was there that Gunderman honed her skills by connecting with members of the community and building professional relationships. While an undergraduate, Krysta worked in Admissions and Orientation helping students transition into a new chapter of their life. She also served on the Program Board, aiding in the planning of a wide variety of social events for students, including dances, game nights and siblings’ weekends. Along with a degree in Communication Studies, Krysta brings to the new role a passion for helping others and joy for connecting with community members.

“I’m excited for the opportunity to work with ASR on their many exciting projects,” said Gunderman. “I’m ready for a new path with a smaller company that makes a big impact. ASR Media has become an important part of the Lehigh Valley’s growth and image. I am inspired by the team’s work and look forward to where this next adventure will lead.”

Gunderman’s responsibilities as Project Manager include coordinating and organizing community and corporate events, client relations and oversight of corporate projects.

Kauffman joins the team with over a decade of experience in video production, including more than 3 years at WLVT PBS39. He holds a B.S. in Electronic Media and a minor in Computer Science from Kutztown University. His skills include both producing and editing and is truly in his element behind the camera. Kauffman, a licensed drone pilot, is known for his impeccable footage of the Lehigh Valley. While in school, he cultivated his passion for filming as an intern at Lou Reda Productions where he assisted in the production of The History Channel’s Vietnam in HD. Kauffman is also uniquely proud of his involvement retrieving historical footage for NBC’s coverage of the 2012 London Summer Olympics.

“I’ve worked on a number of projects with ASR Media over the years and I am proud to formally be part of the team,” says Kauffman. “The creative, collaborative environment they cultivate not only leads to exceptional videos but also a workplace in which everyone is productive and successful.”