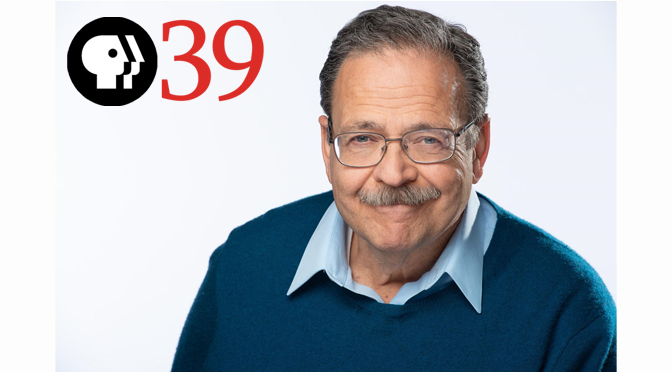 Grover Silcox will receive this prestigious honor at the 2019 Mid-Atlantic Emmy® Awards in September.

Bethlehem, PA. – June 25, 2019 – PBS39’s Grover Silcox has been named to the National Academy of Television Arts and Sciences Mid-Atlantic Chapter’s Silver Circle Society. This prestigious award will be presented on September 28, 2019 during the Mid-Atlantic Regional Emmy® Awards in Pittsburgh.

“We are so fortunate to have Grover’s talent and passion on our team,” Tim Fallon, Chief Executive Officer at PBS39 said. “His work also extends beyond the television screen. He is a tremendous ambassador for our station out in the community. He also takes the time to pass on his abundance of knowledge and mentor fellow colleagues.”

The Silver Circle is an honor society for members who have spent 25 years or more working in the television industry. It is the intent of the Society to recognize those people in a television station, cable channel or production house, who have been a reliable colleague, respected mentor, creative contributor, diligent advocate for the audience or an ambassador within the industry.

“It is truly humbling to be recognized in this way,” Silcox said. “I have been blessed to do what I love for decades and I am grateful for the many opportunities I have had on this journey.”

For approximately thirty years, Silcox has entertained viewers and listeners throughout the Philadelphia region. Whether it was in his Emmy®-award winning segment about scrapple, or his five-minute in-depth report on the boy who could solve a Rubik’s-cube puzzle with his toes, Silcox has always had the gift of whimsy.

Since joining the team at PBS39 in 2006, Silcox has continued to enhance his track record of producing excellent and entertaining feature reports. Currently Silcox hosts Counter Culture on PBS39. In this weekly half-hour talk show (based on location in a local diner), Silcox welcomes artists, authors, comics, singers, historians and others to talk about their passions. During his tenure as the host of PBS39’s Let’s Go! Silcox produced feature reports on attractions and activities in and around eastern Pennsylvania and western New Jersey.

He has also used much of his time in public media to document local and world history. He has become an expert on the history of Bethlehem Steel and produced several feature-length history programs including Philly Firsts, Bringing New Life to Old Steel, Wyomissing: An American Dream and World War 2: Pennsylvania Patriots. Silcox was the last reporter to interview “Wild Bill” Guarnere before the Band of Brothers soldier’s death in 2014. His work documenting the story of a Nuremberg Trials interpreter earned him an Emmy®-award nomination in 2016. His documentary Wyomissing: An American Dream was recognized with a national public media award from the National Educational Telecommunications Association.

“Grover has the natural ability to entertain,” Yoni Greenbaum, Chief Content Officer at PBS39 said. “This recognition is well-deserved. We are so pleased Grover has chosen to share his gifts with our team and viewers in our region and beyond.”

Prior to coming to PBS39, Silcox served as a feature reporter on FOX29’s Good Day Philadelphia and as an on-air morning radio personality on 103.9 WMGK and 93.3 WMMR in Philadelphia. For more than 20 years, he produced comedy shows for television networks, including: HBO, NBC, CBS, the Nashville Network and Comcast. The three-time Emmy® Award winner is a graduate of Temple University and currently lives in Montgomery County. In addition to his long-time work in media, he continues to perform as a stand-up comedian and the presenter of a one-man show featuring the works of Edgar Allan Poe.