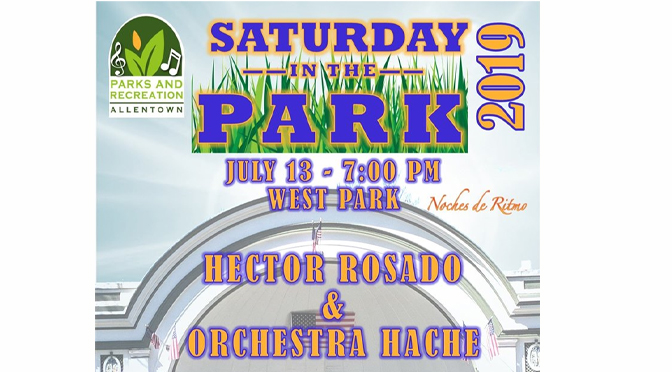 Hector Rosado and his orchestra “Hache” will perform as part of the Allentown Department of Parks & Recreation’s 2019 Saturday in the Park concert series at historic West Park on Saturday, July 13 from 7:00pm to 8:30pm.  West Park is located between 15th and 16th Street between Linden and Turner streets.

Starting his life in the Steel City, Hector is one of five sons of Puerto Rican immigrants raised on the south side of Bethlehem. He was inspired by a neighborhood Motown Band when he first started playing congas. His mother encouraged him at age 10 by taking him by bus to purchase his first conga in the Bronx. By age 16, he sought his own apprenticeship in NYC seeking out the master Eddie Montalgo as his mentor. Soon after, Hector was opening-up shows for Ray Barretto, his hero. In total, Hector’s career spans nearly four decades.

A respected educator, Hector taught at Community Music School in Allentown, in

elementary schools, and for the past eight years, has directed a Latin Music Clinic. This unique clinic is an outreach to teach adult singers and instrumentalists the elements of Latin salsa music.

“El Batey” is the opening dance group that will be performing at 6:15pm.

In 2011 Flor Velez, director and choreographer, started the dance group with the name Puertorrican Culture Preservation Dance Group. Joaquín Nieves, professional choreographer and director of folkloric dance of the Guateque Group of Puerto Rico, came to Allentown to help PRCP organize and give a workshop to teach different Puerto Rican rhythms.

The Puerto Rican Dance Culture preservation group has performed at difference events in Pennsylvania, New Jersey and New York. In 2016, the name was changed to “El Batey” (this is the place where our ancestor celebrated his celebrations dancing and playing music.) Twenty dancers are currently performing.

Saturday’s concert and dance performance is part of the Noches de Ritmo festival.

The Puerto Rican Culture preservation group will be selling refreshments.

For more information, please contact the City of Allentown Department of Parks & Recreation at (610)437-7750 or visit us at: https://www.facebook.com/allentownparksandrec/.