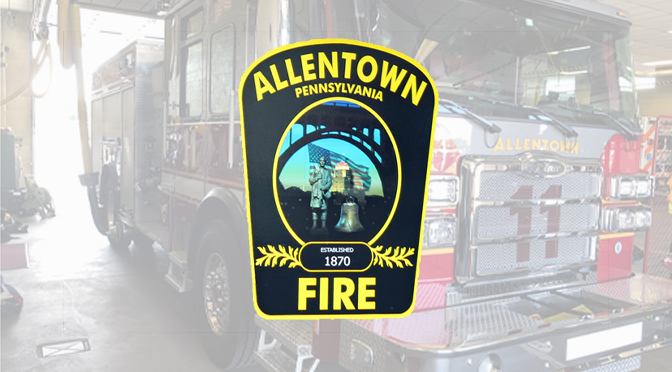 Peter Lenig is being honored as the 2019 Allentown Fire Fighter of the Year.  Ian Lenig is the recipient of the Alfred W. Fischl Fire Service Award.  Both were recognized at the Allentown Fire Department’s annual memorial and awards service held this morning at Scottish Rite Cathedral.

Peter Lenig joined the Allentown Fire Department in 2003 and graduated from the Fire Academy that June. He has spent the last 16 years making significant contributions to the AFD and in 2010 was promoted to lieutenant.  In 2011, Peter assumed command responsibility of the department’s self-contained breathing apparatus team.  For over 12 years Peter has served on the department’s Hazardous Materials Team.  His Engine 9 crew has been impressed with his constant desire to learn about all aspects of operating on a rescue engine.  At the firehouse, Lenig fulfills all assignments and responsibilities expected of a lieutenant, tends to office work with enthusiasm and pays attention to detail.

Ian joined the department in 1992.  Over the past 25 years, he has dedicated his life to the fire service and the citizens of the city. He has served as a firefighter, fire specialist, fire lieutenant and fire marshal, and now toward the end of his career has decided to go back to the rank of lieutenant.  During his last seven years as fire marshal/inspector, Ian was tasked with hundreds of inspections and fire investigations. His devotion to the job helped identify structures in desperate need of remediation due to code violations and because of this determination, the structures were made safer and eventually brought-up to code.

During Fire Prevention Week, the department recognizes firefighters for their actions over the past 12 months.  In addition to Firefighter of the Year and the Alfred W. Fischl Award; Certificates of Heroism, Bravery and Merit, a Chief’s Award, Years of Service awards and Unit Citations are presented.

Subtituting for Mayor Ray O’Connell, Managing Director Joseph McMahon told those in attendance, “It looks like pretty glamorous and exciting work, but the realities of your jobs are much different. It’s life-threatening, but you do it and you do it well. Words don’t exist to describe the feelings of those you have saved from death or serious injury or whose property you preserved from ruin.”

The Chief’s Award, which goes to individuals who go above and beyond in fostering the department’s image through activities and events they attend and facilitate outside their normal working hours, was presented to Lieutenant Mark Trumbore.

Trumbore is credited with organizing annual Memorial Day efforts to spruce-up the grave sites of deceased members and place a new American flag at every location. He has also been instrumental in doing historical research on the department. Without this dedicated work, historical records would be nowhere near as accurate as they are today.

Certificates of Heroism were awarded to four firefighters in the November 2018 rescue of a man from a burning vehicle in the 1400 block of Gordon Street.  They are: Lieutenant Vincent Kidd and firefighters Dobrick III, Nyemscek and Joseph Kemmerer.

Unit citations in the vehicle fire rescue were earned by lieutenants Kidd and Ian Lenig and firefighters Dobrick III, Fuica, Kemmerer and Nyemscek.

Unit Citations were awarded to 11 firefighters for their roles in the November 2018 rescue of a young man whose scooter was struck by a vehicle resulting in the victim landing precariously beneath a second vehicle.  The recipients are Battalion Chief William Held; lieutenants Jack Bryant, Paul Heckenberger and Jamie Miranda and firefighters Foulke, Matchette, Munsch and Paul Dannecker, Kevin Jefferson, Adam Perreault and Anthony Rosanio.

Firefighter Eric Sommers was cited for bravery for entering a burning apartment on North 23rd Street without hoseline protection and rescuing an occupant who had difficulty breathing and became disoriented due to the smoke.  Sommers also assisted a Muhlenberg College police department officer who entered the building attempting to rescue the occupant.

Unit Citations were presented to firefighters Matchette and Jody Mongilutz and Lieutenant Saylor for saving the life of a 2-year-old boy found unresponsive and not breathing on the 800 block of Allen Street this past April.

Sixteen firefighters were recognized for their response to a large hazardous materials incident at Spartan Brands in the 1200 block of Sesqui Street this past July.  A powder used in dyes became exposed to water causing a toxic vapor cloud that was escaping from the building.  Several homes and businesses were evacuated.  No injuries were reported, but 17 persons were decontaminated at the hospital.

Civilian Certificates of Appreciation were presented to Ace Serrano, who extinguished a car fire in the 1400 block of Irving Street and that same day assisted a bleeding passenger in an auto accident; and Evin Fernandez, who put out a neighbor’s house fire with a garden hose.

A Certificate of Appreciation was presented to Mark Schirmacher for his painting of Engine 10.

More than 100 fourth and fifth grade Allentown students participating in a poster contest with the National Fire Protection Association’s 2019 theme “Not every hero wears a cape; plan and practice your escape!” Poster contest winners were honored with certificates.