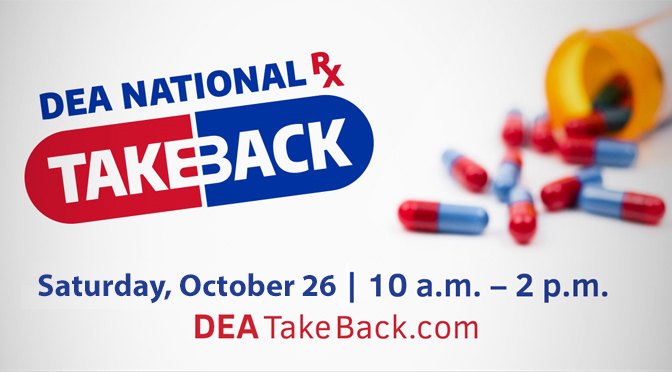 Residents can rid their homes of expired or unused prescription and over-the counter medicines during National Take Back Day drug collection events in Allentown on Saturday, October 26.

The Allentown Health Bureau and the Allentown Police Department will collect medications as part of the 18th National Take Back Day at the Giant Supermarket at 3015 W. Emmaus Avenue, the CVS Pharmacy at 1601 Liberty St., and Wegmans at 3900 Tilghman St. from 10:00 a.m. to 2:00 p.m.  The city agencies are participating in the program in partnership with the Lehigh County District Attorney’s Office and the Drug Enforcement Administration.

Drug Take Back programs address a vital public safety and public health issue. Rates of prescription drug abuse in the U.S. are alarmingly high, as are the number of accidental poisonings and overdoses due to these drugs.  Studies show that a majority of abused prescription drugs are obtained from family and friends, including from the home medicine cabinet.

Drug overdoses in Pennsylvania have also increased dramatically in recent years and Allentown and the Lehigh Valley are no exception – overdose deaths have continued to rise in Allentown and Lehigh County over the last several years. In 2018, more than 4,400 Pennsylvanians died from a drug overdose.

Prescription drug abuse has quadrupled in the past ten years; it now results in more deaths than all illicit street drugs combined. Almost all prescription drugs involved in overdoses are originally legally prescribed by physicians.

“Taking the simple step of cleaning out your medicine cabinet of old and unwanted prescriptions and over-the-counter medicines can significantly reduce the possibility of an accidental poisoning or intentional misuse by a family member,” said Allentown Health Bureau Injury Prevention Manager David Synnamon.

In addition, citizens are now advised that traditional methods for disposing of unused medicines – flushing them down the toilet or throwing them in the trash – both pose potential safety and health hazards.

Since the first Take Back day in 2010, more than 13,600 pounds of medication have been collected across Lehigh County.

Persons who are unable to attend the October 26 events are reminded that a permanent collection box is available at the Allentown Police Department’s Patrol Station at 10th & Hamilton streets.  The police station collection box is located in the lobby of the building and is accessible 24 hours a day, seven days a week.

The one-way collection boxes are bolted to the floor to prohibit removal of the boxes and retrieval of medications from within the boxes without proper authorization.

The collected medications are burned in an approved incinerator.