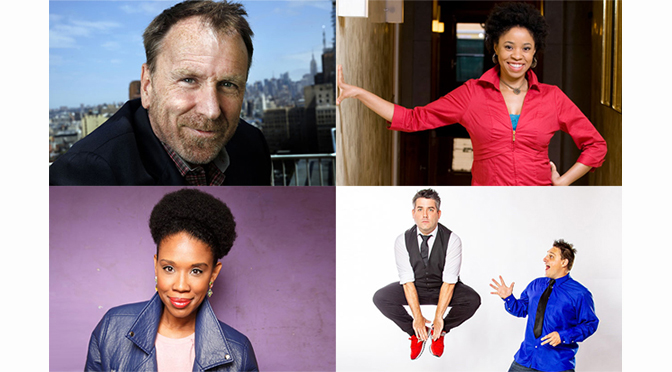 BETHLEHEM, PA–Iconic stand-up comedian Colin Quinn, Chicago native comedy queen Marina Franklin and award-winning sketch duo Chris O’Neill and Paul Valenti are among the latest comedy acts coming to the ArtsQuest Center at SteelStacks. Tickets for Colin Quinn Live and The Chris & Paul Show go on sale Nov. 6, 10 a.m., to ArtsQuest Members and Nov. 8, 10 a.m., to the public. Tickets for all other performances are on sale now at www.steelstacks.org or 610-332-3378.

On Dec. 12, 8 p.m., the Musikfest Café presented by Yuengling welcomes comedian, actor and writer Colin Quinn. Quinn rose to fame on MTV’s “Remote Control,” and is well known for his work on “SNL,” “Tough Crowd with Colin Quinn,” and films like Grown Ups and Trainwreck. He has several shows streaming on Netflix including his CNN special, “Colin Quinn: Red State Blue State,” and his first book, “The Coloring Book,” is out now.

A favorite in comedy festivals across the world, New York based Marina Franklin is emerging as one of the hottest comedians in the comedy scene. Her memorable TV and film appearances include HBO’s “Crashing,” the hit movie Trainwreck, Stephen Colbert’s Late Show, Conan O’Brien, The Jim Gaffigan Show and more. She will be performing in the Fowler Blast Furnace Room this Valentine’s Day, Feb. 14, 8 p.m.

The Chris & Paul Show will bring their comedic genius to the Musikfest Café Feb. 29, 8 p.m. The hilarious duo formed back in 2000 and has since won numerous awards including Best Sketch Comedy Duo – The INNY Awards, Best Newcomer – The Montreal Comedy Festival, Best Sketch Group – Jackpot Sketch Festival and many more. They were most recently finalists on NBC’s inaugural season of “Bring on the Funny,” where Judges Keenan Thompson, Chrissy Teigen and Jeff Foxworthy could not contain their laughter.