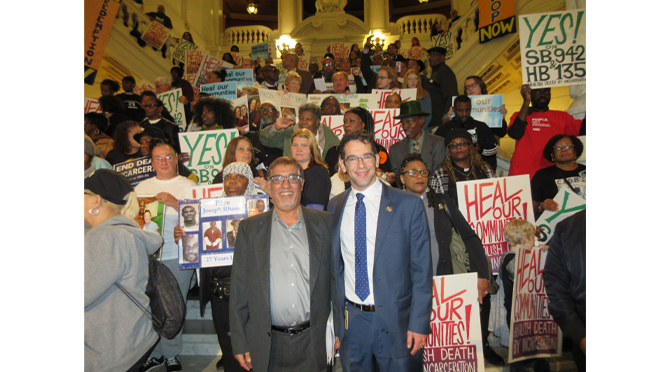 The 1980s and 90s saw an ugly trend in America: A rising crime rate. Elected officials and policy makers reacted understandably: By getting tough on crime, enhancing harsher prison sentences, building more prisons and generally taking a model of locking people up and throwing away the key.

Today, with the benefit of hindsight, we can safely say that these policies do not make anyone safer, devastate communities (particularly people of color) and drain our tax dollars from more productive uses. That is why the past few years have been so positive: Republicans and Democrats have come together to spend more money on rehabilitation which can keep all of us safer.

The latest effort of this has been a grassroots swell to advocate for the passage of SB 135 and HB 135, which is giving imprisoned people hope and chance at redemption. These bills would eliminate life with parole for individuals who can prove that they have been rehabilitated and do not present a danger to society.

In Pennsylvania, there is no possibility for parole if a person is sentenced to life in prison, no matter what the circumstances are. This is why groups like the Coalition to Abolish Death by Incarceration (CADBI) have called on the PA General Assembly to pass legislation and embrace policies that heal communities.

To be clear, no one want to simply open the doors to our prison. What we do want is a comprehensive, data-driven approach which would allow individuals who pose no risk to society an opportunity to obtain parole after 25 or 35 years.

The origin of parole dates back to the 19th century, when the practice of “giving mark” was established by English and Irish prison reformers. Under these early systems, prisoners were granted a release from working toward self-improvement and redemption. It made economic sense to release inmates back into Society. It was parole board that exercised this discretion in terms of these releases, deciding whether the incarcerated had, indeed, been reformed. However, in 1990, this changed.

The discretion for release, then, was removed from the parole board and retained by the judiciary through the process of charging the offenders for their crimes with long sentencing without parole.

This political moment over-emphasized law and order at the expense of keeping our society safe and actually investing in anti-poverty, crime prevention and educational opportunities which could stop the creation of criminals to begin with. They resulted in an explosion of incarcerated individuals, the creation of the so-called “super predator,” mandatory minimum sentences and a fake tough on crime approach.

To put it another way: 2.2 million people are imprisoned in America, a 700% increase since 1970. The United States is only 5% of the world’s population, but accounts for 25% of those incarcerated. 90% of incarcerated persons are poor, and they are overwhelmingly minorities.

This over-emphasize on incarceration robs our tax dollars. Nationally, it costs $34,135 per year to house an average prisoner. A 50-year sentence for a 16-year old will cost approximately $2.25 million.

In Allentown, we spend roughly $10,000 per student. Tell me, which is cheaper?

Reforming life without parole laws will allow for individuals who have earned a second chance to obtain it. It will save our limited taxpayer dollars and allow us to invest them in more productive uses, like early education, job creation and infrastructure investments which will benefit us all.

It is foolish to think that we can jail our way out of the problem of crime. Criminals need to be separated from society. But, if you are a law-abiding citizen, tell me, what is your preference: Investing our limited tax dollars in programs which will stop the creation of criminals to begin with, or only dealing with a crime after the damage has been done?

We need solutions that work. It is far more expensive to lock individuals up for life than to invest in our schools and our communities. These sentencing practices do not make us safer, and they deny the inmates who have demonstrates progress and maturity the chance to rejoin their families and communities and contribute to those communities in meaningful and productive ways.