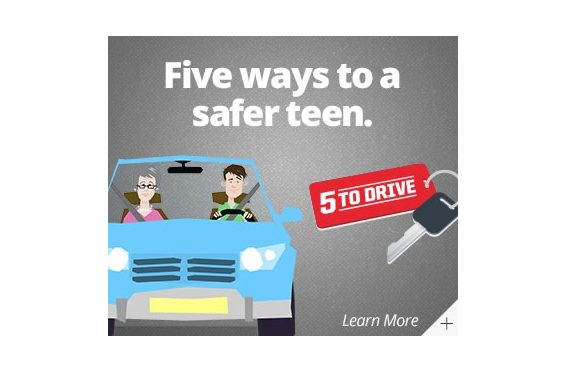 Parents: Set the Rules Before They Hit the Road

Talk to Your Teen Drivers About the “5 to Drive”

Learning to drive is very exciting for teens, and a driver’s license is a giant step toward independence. But when a teen driver is getting ready to hit the road, a parent’s job isn’t done. In fact, talking to your kids about the dangers of driving is one of the best things you can do to keep them safe. Tragically, many parents just assume their teens get this information elsewhere, so they don’t have the conversation.

Every parent should talk to their teens about the rules of safe driving, but a recent survey shows that only 25 percent of parents have done so.  It can be difficult to talk to teens about anything, let alone a serious topic like safe driving. Many parents don’t know what to say, or give up if they feel like they’re not being heard.  In order to provide parents with the tools, resources, and words they need to keep their teens safe, the National Highway Traffic Safety Administration has teamed up with state and local highway safety and law enforcement organizations on the teen driver safety campaign “5 to Drive”. The education and awareness campaign identifies the five most important rules all teen drivers need to follow.

I encourage you to get the facts, start talking to your teen about the “5 to Drive,” and Set the Rules Before They Hit the Road.

Please talk to your kids—this week and every week—about how to be smart and safe behind the wheel.

For more information about  the “5 to Drive” campaign visit www.safercar.gov/parents.

Contents of this press release comes from http://www.trafficsafetymarketing.gov/teens