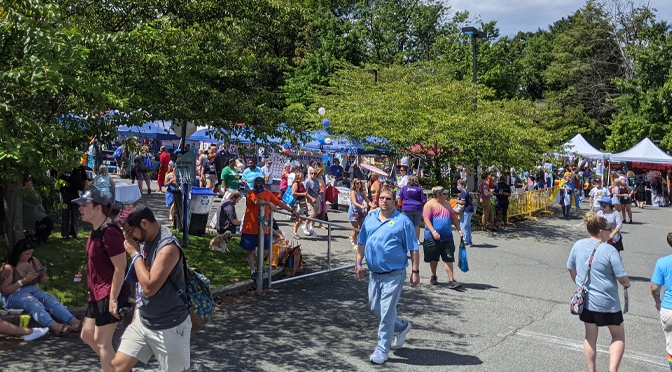 Pride, acceptance and inclusion were the words of the day at the Jewish Community Center (JCC) in Allentown Sunday as the Lehigh Valley celebrated its 28th consecutive Pride event.

The festivities included performances from local singer-songwriters and drag artists throughout the day. Food, drink and dedicated spaces for teens, kids and sober individuals were also available.

The event was held at the JCC and organized by the Bradbury Sullivan LGBT Community Center with the help of over 100 volunteers. In his opening remarks PA State Senator Pat Browne acknowledged the role the group has played in ensuring protections for LGBT individuals in the Lehigh Valley and beyond.

“We have a lot to be proud of because of your work,” Browne said.

The festival drew a large and diverse crowd with everyone from small children to elderly people in attendance. Warm weather also attended the festival this year, with plenty of sunshine and no rain in sight.

“It’s a great day to celebrate pride in the Lehigh Valley,” said Allentown Mayor Ray O’Connell in his opening remarks.

After remarks from several area politicians and community leaders, the event was kicked off by MCs Carol Ann Carol Ann and Sharon Ann Husbands, two drag artists who helmed the mainstage events throughout the day. A performance from the Philadelphia Freedom Marching Band paid homage to LGBT “visionaries” and the long history of work done to protect the community. Other performers included singer-songwriters from the area.

The day was capped off by performances from Kylie Sonique Love and Ariel Versace, both known from their time as contestants on RuPaul’s Drag Race.

While attendees could enjoy performances under the tent or partake in beverages at the Pride Pub, local vendors and businesses were also on hand to pass out free products and talk more about their offerings.

One wing of vendors was composed entirely of local artisans who displayed and sold their work.

Art and free products were not the only things on hand across the grounds. Patrons at Pride were able to receive COVID-19 vaccinations and HIV testing during the event.

The variety in services, products and performances mirrored the inclusive theme of the event itself and gave those in attendance plenty to do while enjoying time with family and friends in a safe space.