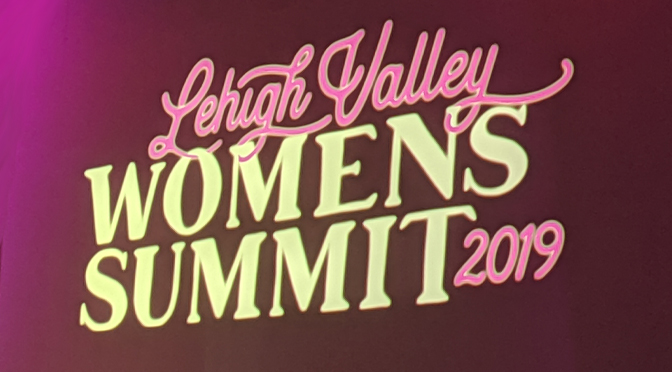 Nearly 500 women spent a day focused not on others but on themselves on Tuesday, June 5.

The women, many of whom were executives and employees at local companies, spent the day meeting and learning from some of the most successful women in the Lehigh Valley.

The 2019 Lehigh Valley Women’s Summit offered a chance for women of all backgrounds to mix and mingle with other women and learn from their successes and failures. The event was organized by the women’s branches of the Lehigh Valley Chamber of Commerce and United Way of the Greater Lehigh Valley.

As one of the speakers at the conference noted, the energy at the event was unique.

“There is nothing like the energy in the room when there’s a group of professional women in the room,” said Meloney Sallie-Dosunmu during her presentation about the importance of diverse and inclusive social groups.
After Sallie-Dosunmu’s presentation, online yoga instructor and CEO Sadie Nardini took the stage. Nardini focused her talk on channeling what she called the “inner lioness”.

Nardini told the sold-out crowd every woman should unleash their inner feminine strength and strive to find an inner peace through reflection and deliberate action.

Along the way she also cracked jokes about being a female CEO at a time when men still hold out most top leadership positions and took the crowd through a lioness breathing technique that led 500 women in sticking out their tongues and affirming their own power.

Afterwards, Nardini expressed her enjoyment in being asked to attend the event. She said she has always felt that it is important for her, as a CEO and businesswoman, to do what she can to empower other women to find their potential.

The conference offered more than lion breathing and some laughs at the expense of male-dominated fields. All attendees were able to attend two smaller breakout sessions on various themes.

One session focused on financial literacy and security. In following the theme of the day, all the panelists were women who had decades of experience in financial advising. The session gave young women especially insider tips and tricks on building savings accounts that would carry them through retirement.

All of the women fielded questions and seemed to give as much advice as they could give in the 40 minutes allotted to them to do so.

Similarly, local women who have successfully started their own businesses (called “side hustles” at the event) gave advice and anecdotes on everything from how to handle money to how to tell your mom that you are quitting your stable job to start your own small business. Both panels, and much of the day, remained upbeat and humorous while also offering advice rooted in reality.

In addition to the speeches and sessions the women in attendance had multiple opportunities to mingle with each other and learn more about several area companies either run by women or with women in mind. The morning included a mimosa break, and the afternoon a dessert break, in a “marketplace” featuring vendor tables. Lunch was also described as a networking opportunity, where women could meet each other and discuss their passions and struggles as professionals in a laid-back environment.

Many of the women in attendance developed relationships with people they had never met before but felt inspired to talk to. Some of these conversations came as a result of Sallie-Dosunmu’s challenge to find people different than the ones you normally interact with; the tables at lunch were each a blend of experiences and backgrounds finding common ground and shared connections.

By the end of the afternoon break connections had been forged and information retained, enough to already consider the day a success, but there was still one more presentation left on the schedule.

Best-selling author of Eat, Pray, Love and several other novels Elizabeth Gilbert delivered the keynote address. She spoke passionately about her time as a struggling writer in New York City and how she had to teach herself how to make time to write.

She also talked about the divine feminine and masculine, and how spirituality and morality too often encourage women to give all of their energy to others. According to Gilbert, women need to spend more time on themselves in order to be happy and healthy.

In the same way Sallie-Dosunmu issued a challenge to those in attendance so too did Gilbert at the end of her address. She urged women to set boundaries, and to keep those boundaries, to ensure that they were not giving all of themselves to someone else and forgetting about their own being.

This seemed to capture the essence of much of the conference. The day pushed women to “be [their] own primary relationships” as mistress of ceremonies Ashley Russo said. The conference provided a unique event where women could focus not on those around them who demanded their energy but instead on could focus on what each woman wanted for herself professionally and personally.

This was the 10th annual conference put on by the two groups and several sponsors at Cedar Crest College in Allentown.