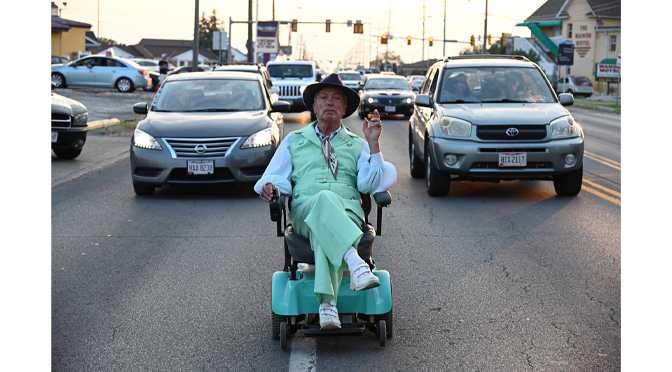 Photo from the film Swan Song

Series kicks off on Aug. 28 with Swan Song, plus an appearance from director Todd Stephens

BETHLEHEM, Pa. – ArtsQuest’s Frank Banko Alehouse Cinemas will restart its LGBTQ+ Film Series – which previously ran every year from 2012 through 2019 – on Sat., Aug 28 at 6:30 p.m. with a screening of the award-winning feature Swan Song. Todd Stephens, the film’s director, will be in attendance to participate in a talkback/question and answer session after the film. Tickets are free and can be reserved at steelstacks.org/film or by calling the ArtsQuest Box Office at 610.332.3378.

The LGBTQ+ Film Series, when produced prior to the pandemic, would last for one month of the year and tickets cost $10 each. Thanks to grant support from the Neighborhood Assistance Tax Credit Program, the series will now run throughout the year and will be free to attend. The series is also now curated by three of ArtsQuest’s Cinema Committee members: Alessandra Fanelli, Catherine Ford and Adrianna Gober.

“I am beyond ecstatic to be playing a role in the return of the LGBTQ+ Film Series, which is now more accessible than ever,” says Gober, who also serves as the co-curator of the cinema’s First Saturday Horror Series. “We aim to highlight films from the rich history of queer cinema that are not only diverse in genre, style and country of origin, but also inclusive of a wide and diverse scope of LGBTQ+ identities, experiences and perspectives and to share them with the community. Swan Song’s themes of queer resilience, connection and reconciling inter-generational differences, explored through an authentic queer voice, make it a perfect choice to kick the series back off.”

Swan Song, the winner of the 2021 NewFest Pride Audience Award, stars renowned actor Udo Kier as retired hairdresser Pat Pitsenbarger, who escapes the confines of his small-town Sandusky, Ohio nursing home after learning of his former client’s dying wish for him to style her final hairdo. Pat embarks on an odyssey to confront the ghosts of his past – and collect the beauty supplies necessary for the job.

“I am thrilled to be coming to Bethlehem,” says Stephens, whose credits also include writing 1998’s Edge of Seventeen and writing and directing 2001’s Gypsy 83, among others. “Bethlehem reminds me a lot of my own hometown of Sandusky, Ohio, where Swan Song is set. The film is about a man and his town coming back to life — and I have watched the same thing happen in the Lehigh Valley.”

The next film in the LGBTQ+ Film Series will be 1999’s But I’m a Cheerleader, starring Natasha Lyonne, on Thurs., Oct. 7. Full details will be announced soon.