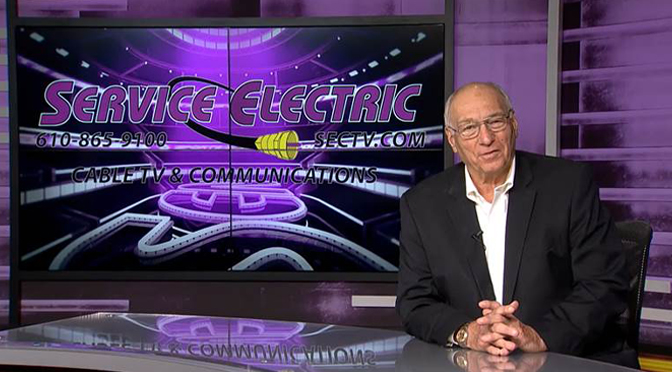 Lehigh Valley, PA – October 11, 2021 – For 57 years, Jack Capparell has worked in cable television. On October 11, 2021 he was recognized for his years of dedicated service to the industry with his induction into The Cable TV Pioneers class of 2021.

Service Electric Cable TV & Communications was founded in 1948, and Capparell started his career with the company in 1964, when the cable TV industry was in its infancy and had 12 channels and used tube amplifiers. He has been a witness to the industry’s exponential growth and dramatic change in service offerings over the years. He played a part in several milestones, including the 1972 launch of the nation’s premier pay television service, Home Box Office, in Wilkes Barre. Jack also played a significant role in bringing digital cable TV, Internet service and telephone service to the company’s offerings.

“I have been very fortunate to have worked with some of the greatest innovators and pioneers in our industry, especially John Walson, founder of Service Electric Cable TV,” remarked Capparell, who has spent his entire professional career with Service Electric.  “I am honored to be included with the pioneers of this great industry.”

Twenty one members were inducted into The Cable TV Pioneers’ original class in 1966.  Twenty four more are being added with the class of 2021. Membership in this elite group has grown to almost 700 and is made up of some of the most influential individuals in the industry.

“Just as our industry rose to the challenge of keeping America connected this past year, these men and women continued to make significant contributions on their business, home and community fronts,” stated Pioneer chairman, Dave Fellows, adding, “The Class of 2021 exemplifies the Pioneer spirit and commitment to do the best no matter the circumstances.”

In 1947, John Walson ran a cable to connect his appliance store in Mahanoy City, PA to an antenna tower on top of a nearby mountain, eventually connecting homes in the community. As a result, the cable television industry was started in America. This model was copied throughout the country in areas where TV reception was difficult or impossible. Service Electric is also the birthplace of Home Box Office (HBO), launching the country’s first premium subscription service in the Wilkes-Barre market in 1972. Mr. Walson was guided by one fundamental principle;  people wanted quality access to television and his duty was to provide it. Still family owned, Service Electric continues to build its positive reputation in the cable industry, offering a variety of TV, Internet, telephone and telecommunication services.

Established in 1966, the Cable TV Pioneers is composed of individuals responsible for building the systems that have become the nucleus of today’s modern cable broadband industry. For over two decades, the Cable Pioneers have been responsible for establishing and funding the Cable Center. Originally located at Penn State, the Cable Center was moved to the campus of Denver University in the 1990s. Following the Center’s grand opening, the Cable Pioneers initiated a further recognition of exemplary service to the cable TV industry through The “Cable Hall of Fame” program. The event will be streamed at CableTVPioneers.com and on the Cable TV Pioneers YouTube channel on Monday, October 11, 2021 at 6 p.m.