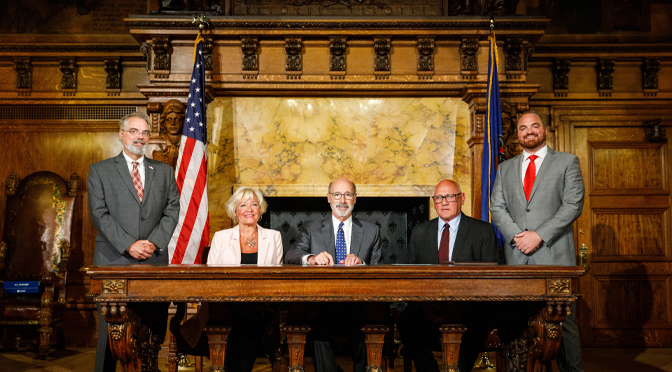 Harrisburg, PA – September 20, 2022– Senator Boscola welcomed Frank Lambert to the State Capitol today for the ceremonial signing of Boscola’s “Christine’s Law” by Governor Tom Wolf.  Christine Lambert, Frank Lambert’s wife was killed on Christmas Day 2005 when a large piece of ice dislodged from a passing box truck and crashed through the front window of the vehicle that Christine was driving.

Senator Lisa Boscola’s legislative proposal, which the Governor signed into law as Act 90 on July 11, 2022, requires drivers to remove ice or snow from their vehicles within 24 hours following heavy snow or ice storms.

Named “Christine’s Law,” Boscola said her proposal would help prevent tragedies like the one that befell Christine Lambert and the Lambert family.

“Welcoming Frank Lambert to the State Capitol for this public signing of Christine’s Law is both a wonderful and solemn event,” Boscola stated.  “I have been fighting on behalf of Christine Lambert’s memory to get a preventative law on the books ever since that tragic accident over a decade and a half ago,” Boscola said. “It’s been a long road to get to this day, but it was a fight I had to win for Christine’s husband Frank and son Matthew.”

“I cannot express how important today is for our family to witness Christine’s Law being signed into law by the Governor of Pennsylvania alongside of Senator Boscola,” Frank Lambert said.  “Senator Boscola never gave up the fight to get Christine’s Law enacted.  We cannot thank Lisa enough for her tenacity and compassion.”

“Act 90 is first and foremost about public safety,” Boscola said. “The goal of Christine’s Law is to increase public awareness and make people more vigilant about clearing snow and ice from their vehicles so that the tragedy that befallen to the Lamberts don’t happen to other families.”

She said Act 90 strengthens the previous law by deterring drivers and preventing tragedies before they happen.  Before Act 90, state law would only penalize a driver when serious bodily harm occurs from a snow or ice projectile. Christine’s Law will be more proactive, giving police officers discretion to pull over a vehicle where the buildup of ice or snow poses a potential hazard.

Christine’s Law went into effect earlier this month meaning snow and ice removal will be required for the upcoming winter.