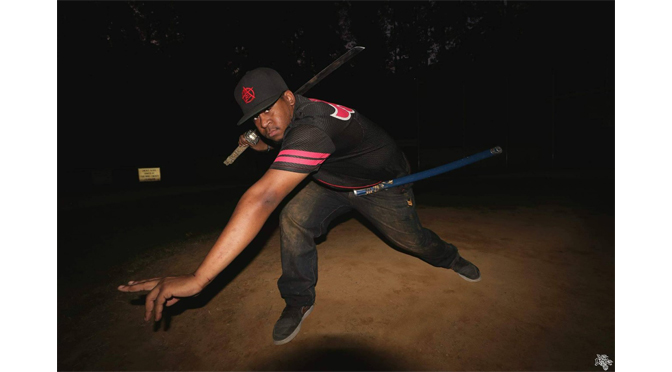 Maverick da Roninn was born in Brooklyn. He moved to Bethlehem, Pa, his home now and he recently performed an incredible show at Sportsmen’s Café. He took some time to speak with me for The Valley Ledger.

Tell us how you got started in music?

Maverick– Okay, the long story short. I was born in Brooklyn, NY and that area was always into music. Not only that but my older brother and his friends used to rap when they were younger and I was raised around that most of the time but I didn’t really get to rap with him. So I always had that slight regret of not being able to. So until around the age of twenty-two I finally got the chance to record something that I’ve written and since then I just haven’t stopped.

When did you arrive in the Lehigh Valley?

Maverick – I live in Bethlehem, PA. I moved to Bethlehem when I was fourteen so in 2012 that is when I started rapping.

Did you have any professional inspirations in music?

Maverick– WuTang Clan, Lupe Fiasco, lyrical artist, his name is Mega Ran. A bunch of other artists that I just listen to on the regular. My older brother and my uncle inspired me too because they were rapping and I just wanted to show my side of how I can do it so they are inspirations as well.

Now before you perform do you anything special you do to get ready for a show like at Sportsmen’s Café?

Maverick– Not really! I just like to mentally prepare before a show. I want to make sure that I give a very good performance. Reminding myself that I can do it. If there is one person looking at me while performing or a hundred or more I can still do the same hundred percent and still come out on top.

Maverick– On August 20th I dropped a twenty-three track mix tape called “Gamers Interlude 2” and that has featuring artists such as Richie Branson and a bunch of other emcees that I have met throughout the years. That is the most current project that I have out right now. I just dropped a video for two songs and I did like a duel song in one video so there is one song that you’ve heard, “Game Over”, the song that I performed at the last show that we met at. I’ve done “Game Over” and then the other side of the song is “Star Cross.” So “Game Over” is the part where I am rapping and using my video game references and just putting metaphors and bars in it. Whereas with “Star Cross” it’s like a short interlude with me talking to a love interest and I am serenading her. On November 13th I have a new video coming out called “Shoma” which is the other song that you saw me perform. It is a baseball themed video because one of my favorite videos has a baseball character that I like. November 13th, I am releasing it on that date because it is my father’s birthday and he used to play baseball with me when he was younger so it all came at the right time.

Growing up, did you always know you wanted to get into music? Maverick– Growing up I always wanted to but I thought I would never be able to. My older brother’s about four years older than me and from what I remember he started rapping at the age of 14. So, from age 10 to 22 I was just listening and hearing either him or his colleagues do music and I was always the guy in the background. Originally I was just going to my cousin’s house to play video games and after that he asked me what I wanted to do and I said, let’s make a song! It really helped out and life has gotten a lot better.

So, it is therapeutic in a way for you?

No matter what music it is I believe music makes you happy, smile, come alive. Do you feel that in the crowd when you are performing at Sportsmen’s Café?

Maverick– Yes and of course at Sportsmen’s there is always a really good crowd and they really support anybody that comes in there. I can’t help to come alive because I am able to be something.

What do you want to say to the fans who listen to the music you are making?

Maverick – I would like them to know whole-heartedly that I love them, that I appreciate them because at the end of the day they do not have to listen to anything that I ever put out. My first goal of rapping was to rap with my older brother on a track so everything that happened after that is just a bonus. I hope you guys are enjoying the ride and I am making you proud. I am doing everything I can to make sure that every single person that calls themselves a fan and listens to my music that they can feel proud for liking my music. I will continue doing that until…. I die, I guess.

What do you want to say to everyone that comes out to Sportsmen’s Café?

Maverick– I appreciate everyone that will be coming to the show. You are going to have a very good time. It is not only a celebration of my birthday but it’s also me doing a show to give back to you guys and it’s going to be one for the books.

Well, Happy Birthday! We wish you all the best and keep doing what you are doing!

For more from Janel on The Valley Ledger Click Here