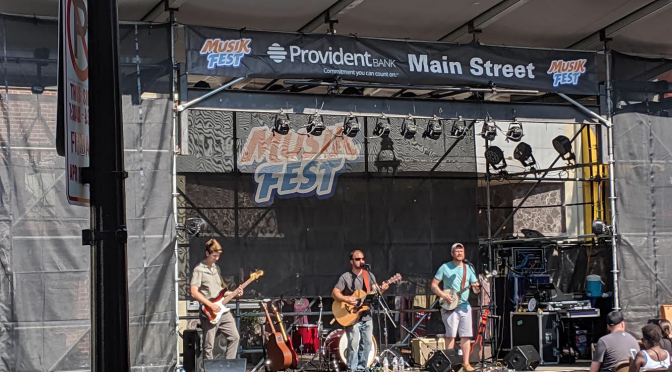 Blazing sun, plenty of walking and a heaping helping of Island Noodles can only mean one thing: Musikfest is in full swing. And while the mainstage, paid ticket acts are a great option, there is nothing quite like catching a free act at the fest.

One of those free acts this year was Copper Fields, a local band with a folksy sound. The band consisted of two vocalist/guitarists and one bass player. The acoustic trio played a 90-minute set comprised largely of their own music, which is available on all major streaming platforms.

The songs were all written primarily by lead vocalist Jason Ziegler. Copper Fields’ music was deeply personal, and the lyrics often dissected intense feelings of love and longing, but the upbeat strumming and bass playing that accompanied the lyrics kept the performance lively.

The songs were both lyrically relatable and musically interesting and stopped some festers in their tracks as they walked by the stage. The set was thoroughly entertaining and offered a great example of what makes Musikfest such a unique festival.

As Copper Fields performed their songs on Main Street, polka played at Festplatz and street performers of every make and model delighted festival goers on every space in between. As Ziegler and his group sang attendees ate and tapped their feet to the beat on what shaped up to be a relaxing and enjoyable free set at Musikfest 2019.