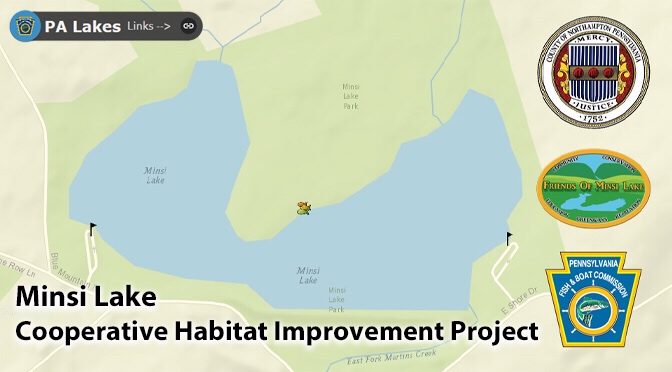 Map in the featured image is from the Pennsylvania Fish & Boat Commission website.

Update on Renovation/Reconstruction at Minsi Lake

Phase I includes the construction of 640 large-scale fish habitat structures that will be built on the empty Minsi Lakebed. The structures will be built from 1,800 tons of stone & 1,765 pieces of rough-cut lumber using heavy equipment operated by PFBC.

Phase II includes the construction of 200 small-scale fish habitat structures that will be built by volunteers, Parks & Recreation staff, Friends of Minsi Lake, Scouts & other youth under supervision by PFBC staff in 2020, after the lake is refilled with water. These structures will be built in the Minsi Lake Parking Lot & then submerged at previously GPS mapped locations in the lake by PFBC staff using specially equipped boats.

In the summer of 2017, youth from the Delaware River Shad Fisherman’s Association Youth Outdoors Adventure Program constructed ten turtle basking platforms that are also part of the Minsi Lake Cooperative Habitat Improvement Project. The platforms will be placed & floated on the surface of Minsi Lake for turtle basking next year, after the lake is refilled with water.

Minsi Lake is a 117-acre reservoir owned by the Commonwealth of PA & leased to Northampton County as part of its public parks system since 1975. Minsi Lake & its surrounding 194 acres of woodlands is one of 18 parks & conservation areas managed for public recreation and green space by the Northampton County Division of Parks & Recreation. The lake is 117 acres & one of only three lakes in the Lehigh Valley that are open for public fishing & boating. The other two are East Bangor Dam in parts of East Bangor Borough & Upper Mount Bethel Township, Northampton County & Leaser Lake in Lynn Township, Lehigh County.

WHY: The project will improve fish & turtle habitat across Minis Lake & it will subsequently improve fishing success for public recreation & enjoyment at the lake.

The nearly 50-year-old dam that impounds Minsi Lake has reached the end of its structural design lifespan. The lake was drained in 2017 so that the existing spillway could be replaced with a much larger one & the rest of the dam could be heightened by nearly 3-feet. To take advantage of this once-in-a-lifetime drawdown of Minsi Lake, Northampton County, as the Commonwealth’s lessee of the lake, became a Cooperative Habitat Improvement Project Partner with PFBC in 2017 to improve fish habitat on the empty lakebed. As a program cooperator, PFBC required the County to facilitate the establishment of a local nonprofit friends group to assist with fundraising for the project. In 2017, the nonprofit Northampton County Junior Conservation School (NCJCS) established its Friends of Minsi Lake Committee to be that group. On July 20, 2017, Northampton County adopted a resolution in support of Friends of Minsi Lake for the betterment of recreation & habitat improvement at Minsi Lake.

HOW: Here is how the Minsi Lake Cooperative Habitat Improvement Project works:

PFBC: Surveyed the lake, developed the habitat plan & will provide all the construction equipment, operators & supervision to build the project.

Northampton County: Officially signed onto the project as a Cooperate Habitat Improvement Partner; facilitated the establishment of FOML with NCJCS & facilitates monthly FOML meetings; developed grant applications for the project on behalf of FOML; & is the local coordinator for the project.